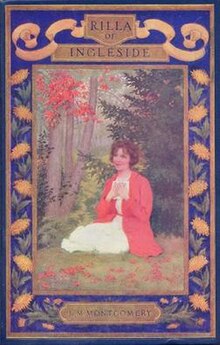 My interest in the Great War began through literature.  My first exposure to the narrative and rhetoric of this conflict was L.M. Montgomery’s Rilla of Ingleside, one of the books in the Anne of Green Gables series.  As a young girl, I read and re-read this book until the cover fell off and the pages frayed.  I read it lake-side at my family’s cabin at a northern Alberta lake, I read it aloud to my little sister, I read it late at night under the covers.  I cried every time. There was something about the account of the impact of the war on a family unit, the way the family’s rhythm was completely usurped by it, that I found incredibly compelling even before I understood the scope of the war from a geo-political perspective.  Later, it was one of the texts I included in my Master’s thesis at the University of Waterloo on the rhetoric and propaganda of Canada’s Great War experience as exemplified through novels written during the time.

A more mature understanding of the Great War came to me through Timothy Findley’s The Wars.  This beautiful novel focusses on the individual toll the war took.  While the writing coming directly out of the war tended to be focussed on heroism, sacrifice, and vilifying of the enemy, Findley, though his characters, states that this is not a war of David vs. Goliath, but rather that “all you get in this war is one little David against another.”

I have also always had an interest in genealogy–the pathways by which I’ve ended up being the person I am, both the nature and the nurture of it, in the place that I am, with the people I am with. I’m not searching for answers to deep questions or looking to uncover secrets.  Like stepping back and looking at the globe to see how the ocean currents move and the tectonic plates slowly drift we can learn something about the planet as a whole, I find that looking at the currents of immigration, employment, religion, and experience that my ancestors faced through the march of time helps me to place myself in the world.  See my own bigger picture.

The impact of the Great War on the western world is so profound, if you were to visualize history like the layers of earth in an archeological dig in profile, it is like the ash from the major eruptions of volcanos–Vesuvius, Mt. St. Helen’s–it is a distinct and thick layer that covered everything that ever came before, and that impacted everything that settled on it since.  It is the same in my and millions of others family trees.  The war sits there as a layer, 3 to 4 generations back, of fathers and brothers and sons and cousins in uniform.  Approximately 600,000 Canadians enlisted in the war, and approximately 60,000 were killed.  1 in 10.  In the full scope of the war over all nations involved, over 18 million people were killed.

Which brings us to 52 Davids.  Following Findley’s sentiment, I have identified 52 ancestors (or husbands of ancestors) whose lives were touched by the war. These are citizen soldiers–dentists, blacksmiths, general labourers, farmers–people from every walk of life.  For some of them I have a lot of information, others, very little.  In some cases, I have been able to contact distant relatives to learn more, in other cases, I have only the very basics.  Each week, from November 11, 2017 through to November 11, 2018, I will publish a profile on one of these men, marking the centenary of the last 52 weeks of the war.  All of these examples except one are Canadian and British soldiers as this is the majority of my family’s history, but rest assured, had I found ancestors who fought for Germany or its allies, I would have just as willingly profiled them.  This is about the sweep of the war, not about its politics. I also have only one American enlistee in my search even though I know that I have more American ancestors who fought.  The biggest reason for this is the lack of records, as in 1973, a devastating fire at the National Personnel Records Centre in St. Louis destroyed 80% of service records of men discharged from American military forces between 1912 and 1960.

I hope one day to visit some of the places and landmarks that I touch on through these weekly posts.  I hope to show them to my children so that they can see how the war affected the currents that have brought them to be where they are as the people they are.

Thanks for your interest!